Are you ready for the next installment of the Spiked! Recipe Challenge? It is no big secret that myself and my good foodie blogger friend, Carrie from Frugal Foodie Mama and I love to cook and bake with alcohol.   Don’t believe me?  Then make sure to check out Carrie’s recipes for Slow Cooker Tequila Lime Beef Barbacoa  and Beer Cheese Risotto with Bacon.  Or my Deep Dish Beer Crust Pizza and Tequila Lime Shrimp Tacos.

Carrie & I have teamed up to bring you all a recipe challenge with a twist (of lime or lemon, if you please

)- your recipe must feature the alcoholic beverage being spotlighted that month! Every two months there will be a new Spiked! Recipe Challenge with a new featured boozy beverage.  July’s featured ingredient is….  American Craft Beers!  Carrie and I are not shy about the fact that we are both beer snobs.  Plus, going with American craft beers is a nod to our country’s Independence Day celebration in just a few days. ;)

So what exactly is an American Craft Beer?  According to the Brewers Association, the definition of a true American craft beer is that the production is small (less than 6 million barrels of beer produced annually), it is independent (aka, not majority owned by a major brewing company), and is made from traditional brewing methods. So by definition that rules out your Budweisers, Miller Lites, & Coors (sorry, folks!).

Not sure if the beer you are considering using in your recipe is a craft beer?  Go local.

Small, local breweries are almost always considered craft beer producers.  If you have a Total Wine or Whole Foods near you, you can definitely find craft beers at those stores! 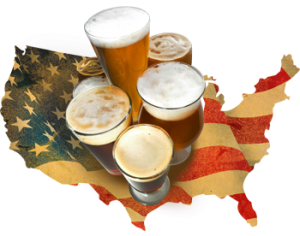 So, let’s get to the rules…

Carrie and I would like for you to follow us via one of our many social media outlets.  Your choice-Bloglovin, RSS feed, Twitter, Facebook, Pinterest… you get the idea.  Plus, following us both will keep you in the loop about upcoming dates for the challenges, announcements of winners, and so on.

The winner of the Spiked! Challenge will receive bragging rights of course, but there are a few other perks…

For inspiration for your Spiked! recipes, be sure you check out the past winners of the recipe challenges on Carrie’s Spiked! Recipe Challenge page!